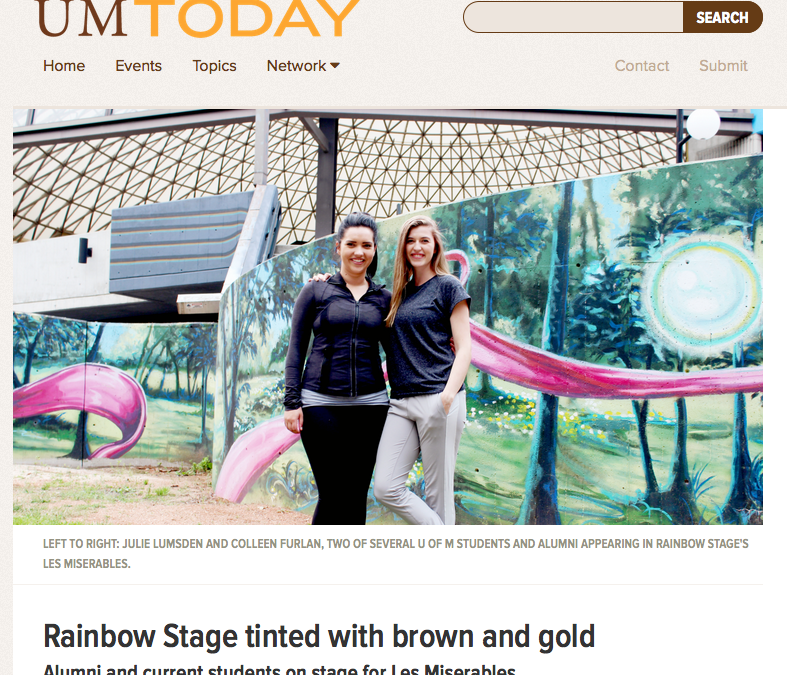 
Rainbow Stage opens Les Misérables on July 9 with a plethora of University of Manitoba alumni and current students hitting the stage.

Julie Lumsden [B Mus Performance/15] plays Éponine. This is her second appearance at Rainbow Stage. In 2014 she was a supporting cast member in The Little Mermaid. Lumsden says playing Éponine is nothing short of a dream role.

“I was so excited to learn I was playing Éponine,” said Lumsden. “Les Mis is such a powerful show with amazing music. To be part of this cast is a dream come true.”

Lumsden will be on stage with long-time friend and University of Manitoba student Colleen Furlan.

Furlan is making her third appearance at Rainbow Stage this year. She was previously supporting cast in Mary Poppins (2013) and starred as Ariel in The Little Mermaid (2014). Along with playing Sister Mary Robert in Sister Act this August, she plays Cosette in Les Misérables. Furlan says being on stage with a close friend like Lumsden can be an emotional experience.

“We don’t cross paths too much on stage,” said Furlan. “We lock eyes for a few seconds, but that’s it. However when Éponine’s death scene happens, I get choked up backstage every time. Even though its just pretend, it’s a very emotional thing to see. It shows you how powerful the music and story really is.”
Visit the complete story

Outdoor Theatre In The Park

Nothing is better than relaxing while walk in the park or watching the river flow unless you can combine it with great theatre.