We Got The Answer

Check Out The Great Deals

“Be Our Guest!”
The Academy Award-winning film comes to life in this romantic and beloved take on the classic fairy tale.

Step into the enchanted world of Broadway’s modern classic, Disney’s Beauty and the Beast, an international sensation that has played to over 35 million people worldwide in 13 countries. Based on the Academy
Award-winning animated feature, the stage version includes all of the wonderful songs written by Alan Menken and the late Howard Ashman, along with new songs by Mr. Menken and Tim Rice. The original Broadway production ran for over thirteen years and was nominated for nine Tony Awards, including Best Musical.
The classic story tells of Belle, a young woman in a provincial town, and the Beast, who is really a young prince trapped under the spell of an enchantress. If the Beast can learn to love and be loved, the curse will end and he will be transformed into his former self. But time is running out. If the Beast does not learn his lesson soon, he and his household will be doomed for all eternity.

**Strobe lighting effects, flickering lights and theatrical smoke will be used during this performance.

August 14 & 15: Be The First To See The Fully Staged Production!

Preview Nights offer the audience the opportunity to view our productions while still in the “creative adjustments” phase. While you will see the performance in its entirety, please know that our team may use this time me to make sound, lighting and staging adjustments.

Rainbow Stage is pleased to be able to offer Preview Night performances. These exclusive nights are available at a reduced ticket cost with reserved seats.

Rainbow Stage is proud to offer an ASL translated performance for Beauty and the Beast on August 28th at 7:30pm

Interpreters will be placed in a designated section of the theatre.
Tickets are $55 each and group rates are available (14+ tickets).
• Limited seating available.
• When booking tickets, those interested should identify themselves as members of the deaf community to ensure seating in the section where they can see the interpreters.
• If no one has requested tickets in the ASL section 48 hours prior to the performance, the interpreters are cancelled.

Choose Your Seat, Pick A Date, Enjoy The Show 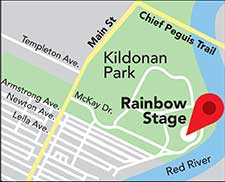 Buy the tickets now, pick the date later. What could be easier?
All taxes and fees included in the price of the ticket